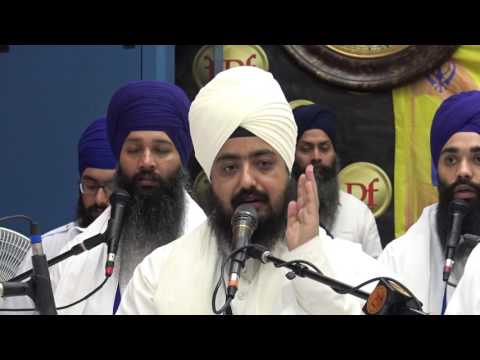 Sant Baba Ranjit Singh Ji Dhadrianwale (Nirvair Khalsa Dal - Gurdwara Parmeshar Dwar Sahib Patiala), is believed to have been born in July 1983 in Punjab, India. Since a very young age he has followed the path of Sikhi and has a deep understanding of the holy scriptures. Unlike many other educators of the Sikh masses, as a young person, he has tirelessly been doing a consistent and influential form of Sikhi Parchaar (preaching), predominantly centralized in the Punjab. His message, in an effort to stop both young and older Sikhs from falling prey to the anti-Gurmat diseases of drug, alcohol and tobacco abuse, which are out of control in the state of Punjab, India. His message is simple, clear and delivered in the "sant-maata" (simple, basic) manner. The kirtan is not in the traditional classical raag form but in the simpler tradition of the sant tradition which has been practised in the sant-panth tradition by such strong figures as Sant Baba Nand Singh and Sant Baba Isher Singh. Sant ji has a strong following due to the fact that his message is kept simple and delivered in language which the average person living in rural Punjab can understand and relate to. The Sant ji's chief aspiration is for the Sikh masses to receive Amrit, to follow the pure life of the Khalsa (Thatt(h) Khalsa Gurmat Rehat Maryada) and for all to develop into examples of the Khalsa Saint